The following is a story of courage and conviction, of hope and dedication. These are the kinds of stories that give us at Matana Foundation inspiration:

“I believe, deeply, that education is one of the things that everyone in the world should have fair access to and I believe it is the one thing in society that levels the playing field for everyone.

I have been teaching at The Oasis Education Centre for just over 2 years now and it’s the job of my dreams. In my time so far at Oasis I have had the privilege of working with some of the greatest, bravest and inspiring young people I have ever known.

Our students come from varying degrees of disadvantage. Their lives and education have been disrupted, most of them are or have been homeless, most have no family support and some have at times turned to drugs and alcohol as a way to escape the seemingly insurmountable obstacles they face in their day to day lives.

Imagine for a moment that you have no family, no home, no money, no food, nowhere to shower and nowhere to leave your possessions. Now imagine trying to go to school. How would you get to school? How could you study? How could you possibly care about school and your education?

For a person to be successful they need a few basic things – they need support, security, love and opportunity. And through skilful intervention, that is exactly what the Oasis Youth Support Network offers. They provide young people like my students with a home, medical care, emotional and psychological care, clothes, food, and programs to support their growth. Once all of those needs are met and our young people have the burden of trying to stay afloat lifted from their shoulders, they can start to consider their future and the many opportunities the Oasis Youth Support Network can offer them. This is when they often choose to resume studying.

If I could just have a few more moments of your time I would like to share the story of a young person whose story really illustrates how powerful this type of intervention can be. This girl was born to a 20 year old single mother. Her mother had no relationship with her own dysfunctional family so they were very alone. Her mother had severe mental illness and depression which lead to drug abuse and heavy drinking. By the time this little girl was 6 years old her mother was an alcoholic. Because of her dysfunctional lifestyle the mother couldn’t work so there was rarely much money for food or rent. This meant that the little girl was always hungry, very unhealthy and tired all the time. Because rent was rarely paid they often had to flee from their rental houses in the dead of the night. By the time this girl was 9 they had lived at over 20 addresses.

Eventually this girl’s mother was unable to maintain any accommodation and they became homeless and ended up living in an unregistered car. Then the mother became very ill and was diagnosed with cancer. Seven months later she died leaving this now 11 year old girl alone. This was the start of a lot more moving around for this girl. She was placed in foster home after foster home but none of them worked. Eventually she was placed with a family where she stayed for 4 years. She initially felt that she could finally build a life for herself, but this foster situation turned out to be dangerous and violent and eventually she was kicked out.

This led to a number of years of homelessness with this young girl sleeping on couches and moving in and out of refuges. She managed to maintain her schooling until the beginning of year 12 when it became too hard and she dropped out and got a job. She went to work one day with everything she owned because her friend no longer wanted her on their couch. Detecting her terror at the impending night on the street someone at her job mentioned that they had heard of a place called Vera Loblay House which is now a house that Oasis is able to provide to young people such as this girl.

Vera Loblay is a stunning house that has been kindly donated to Oasis by the Loblay Family. It is a place that has been providing a stable, long-term home to young people that are committed to pursuing their education, training or employment goals.

Before moving to Vera Loblay, this girl didn’t have any concept of what it felt like to be secure, settled or safe – but she knew she wanted all of those things, so feeling afraid and desperate she contacted Vera Loblay House and was accepted to live there. When she moved into Vera Loblay House she was extremely traumatised. She had almost completely stopped speaking; she shook constantly and flinched at every single noise. She refused to unpack her two bags for fear that she would need to flee at any moment. Over time, very slowly, she started to feel safe and unpack her bags. Living at Vera Loblay House gave her a chance to exhale and relax.

It relieved the terror that comes with homelessness, and once that terror was lifted something extraordinary started to happen. She started looking forward to the future. Sitting alone in the lounge room at about 3 o’clock one morning she made the biggest decision of her life – she decided she would become a teacher and she would work with young people who have been through situations similar to the ones she had experienced.

Well, I am really pleased to report that this young woman did everything in her power to make that dream a reality and I know this because I am that girl.

And I want you to know that this would not have been possible without the support, security, love and opportunities presented to me by organisations such as Oasis and certainly could not have happened without the opportunity to live at Vera Loblay House. 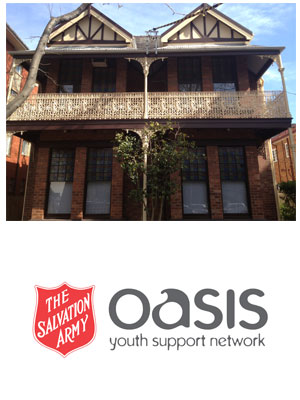